Growing in Confidence Little by Little with Encouragement

At 15, he received the Lee Kuan Yew Exemplary Student Award. Two years later, he won a silver medal for Singapore at the Special Olympics World Games in Abu Dhabi. Read on to discover the story of a unique young man on the autism spectrum. The award recognises students at government-funded special education (SPED) schools in Singapore who have risen above the odds to motivate and inspire their peers. To qualify for the award, students need to be exemplary role models of learning, dedication, perseverance and courage. These should be demonstrated in their progress and contributions in the academic, vocational, sports and/or arts domains. Individuals should also have contributed to the school community and beyond. 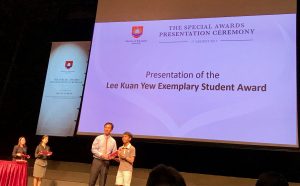 When Rusydi won the award, he was a sociable teenager who took the initiative to help others without having to be asked. He was able to communicate relatively well, in person and through social media. But he wasn’t always as expressive. In fact, it was a very different young boy who first walked through the gates at SAAS eight years earlier.

Diagnosed with autism when he was five, Rusydi was very reserved when he joined SAAS in February 2009. He didn’t interact much with other students and he could not express his wants and needs clearly. While he would speak with family members at home, he did not speak when he was in school. He communicated by blinking and would blink more rapidly, flaring his eyes when he was agitated or upset. Despite this, he demonstrated an artistic side through art and drawing.

It was only in his third year at the school that Rusydi began opening up. With the encouragement and hard work of his teachers, he began speaking with them and other students. And eventually, after a couple of years, progressed to being able to get up onto the stage during assembly to lead the other students in our nation’s Pledge. it was a significant feat for him, achieved after he persevered in rehearsing the pledge repeatedly till he had the confidence to step onto the stage.

When they are 13, students at SAAS begin a Transition Planning programme to help them prepare to lead productive lives after school. Students participate in school-based vocational programmes, community engagement, as well as internships and work attachments with industry partners.

Not only did Rusydi pick up new skills quickly, he helped his teachers by demonstrating the newly-acquired skills to his classmates. One of his teachers, Debbie Thng, said, “When we’re busy with students who require more attention, he is able to help us manage the class.” She went on to describe how Rusydi watches out for others around him – opening doors for others, helping to care for classmates during outings and offering to help teachers etc. At home, he also cares for his younger co Rusydi, who has been able to travel independently for more than three years, has even trained one of his peers to travel independently. The mother of the boy, who lives in the next block to Rusydi was initially apprehensive. She shadowed them to observe and step in if necessary. However, she very quickly discovered that Rusydi was indeed able to help her son travel by himself on public transport. Rusydi the Sportsman: Growing Up

Rusydi loves sports, especially bocce and basketball. He took part and won medals in the bocce competition of the Special Olympics Singapore National Games in 2013 and 2017. And in 2019, Rusydi represented Singapore at the Special Olympics World Games in Abu Dhabi, travelling for the first time in his life without an accompanying family member. He participated in the M08 category of the Bocce event, finishing fourth in doubles and winning the silver medal in the singles competition.

After training for eight years, Rusydi was understandably proud of his achievement. And while he would like to be able to win the gold medal the next time around, his primary focus was not on personal glory. Family is important to Rusydi, and while still a student at SAAS, he expressed a desire to be able to work and take care of his grandmother whom he is extremely close to. Stepping into the Workplace

After graduating from SAAS at the end of last year, Rusydi is now working part-time at a restaurant, six days a week. His employer, Bruce, seems to have only positive things to say about Rusydi. “We are very impressed,” he said. He continued to say that Rusydi is fitting in very well at work and gets along well with all his colleagues.  “He is hardworking, a fast learner and very responsible,” he added.

When asked, Rusydi said he enjoys working hard and the fact that he is able to earn an income. He likes his colleagues, but he also misses school and the friends he made in school. For any individual, the transition from school to work can be challenging. It can be all the more for an autistic person. Unlike the environment at a SPED school, where everyone is familiar with autism, in the real world, the autistic person is likely to encounter some who are understanding as well as others who are ignorant, impatient or even downright rude.

While it is still early in Rusydi’s working life, if the determination and resilience he demonstrated in school are any indication, it is likely that his transition from school to work will be a successful one in the long term.