She observed the routines and movements of the staff, as she planned and waited patiently to execute her escape plan. Then unnoticed, she stole a staff uniform, dressed in it and duped the security guards as she made her way out of the secure facility. Natasha Romanov in a scene from the yet-to-be released Black Widow movie?

But this is not from a movie plot nor is it even fictional. This is true account of an adult on the autism spectrum who was then temporarily warded at the Institute of Mental Health (IMH). Her journey has since taken a different turn, one that is filled with hope. 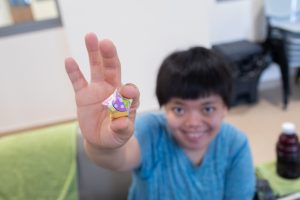 Today, Narelle is a different person from her stealth operative days. She is a sociable 32-year-old woman who loves engaging others in conversations. She is also adept at handicrafts and regularly makes different craft items for the staff at St. Andrew’s Adult Home (Sengkang) [SAAH], where she has been a resident since September 2019. She has grown close to a few of the care staff, referring to them “god ma” or “god sister”. 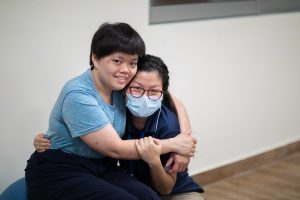 Back to the Beginning

Narelle was diagnosed with ADHD when she was in preschool. The eldest of four sisters, she joined a centre for persons with special needs after graduating from Chao Yang Special School (which caters to children aged seven to 12).  Later, she moved to Tanglin Special School, but only stayed a few months. She suffered bullying at the hands of some of the other students and absconded.

Her mother then tried to get her enrolled at a private Day Activity Centre (DAC), but Narelle was not interested. Narelle remained at home, cared for by her mother, while her father was the sole bread winner for the family of six. 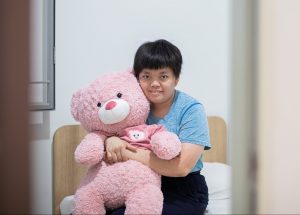 Growing up at Home

From a young age, Narelle loved making friends and would wander off to play and talk to others. While being friendly is a positive trait, Narelle lacked an understanding of boundaries, situational awareness and the ability to assess others’ motives, traits that are not dissimilar to others on the autism spectrum. Her mother was protective and, at times, had to step in to stop her from being over-friendly.

On one occasion, when contractors were in their home, Narelle touched them on their arms, shoulders and faces as she interacted with them. Obviously, that is not the way we usually express friendship to strangers or someone we meet for the first time. But in Narelle’s mind, she was just being friendly.

While Narelle was independent with activities of daily living and loved table top activities, puzzles, art, sewing and just about any type of craft, her behaviour was such that it was difficult for her mother to manage her. Narelle frequently did not sleep at night. Instead, there were times that tried to leave the home. At other times, she broke the window and sat outside. This prompted her family to move to a second floor unit.

In her mid-20s, Narelle was referred to a psychologist at the Child Guidance Clinic at IMH who noticed that she had some of the traits of autism. An assessment resulted in her being diagnosed with autism.

Her challenging behaviours at home continued. And from 2005, after each occasion when she ran away from home, she was admitted for a short stay of about four to five days at IMH. In March 2019, she was admitted for a longer stay at IMH after she stole money from her mother and prepared to leave home for good. Her mother felt she just could not manage Narelle.

While her mother thought that Narelle would be safe and cared for at IMH, Narelle had other ideas. It was here that she observed the movements of the staff, stole an occupational therapist’s uniform and wore it to make her way past the security guards and out of IMH.

It was clear to her mother, that Narelle needed a more secure environment. Speaking recently, her mother said, “Security, in fact, is a better word (rather than “safe”) and is the main criterion I looked for in a residential home for Narelle.”

Narelle’s mother learnt about a residential facility in Singapore designed with the needs of persons on the autism spectrum. She saw the St. Andrew’s Adult Home (Sengkang) [SAAH] compound and felt that the gates and locks were sufficiently secure to ensure that her daughter would be safe. She applied for admission to SAAH for Narelle, who was then assessed and accepted. 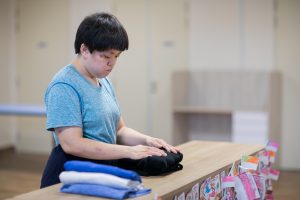 Narelle joined SAAH in September 2019. Initially, she was a little unsettled. But with the patient and persistent efforts of care staff in working with her, Narelle has progressed significantly in her year and a half at the home. She has developed friendships with a number of the other residents and is almost always eager to participate in group activities. While she can be a little resistant when new staff or volunteers try to engage her, she opens up when she sees that they are patient and firm with her.

The staff have also assigned her duties that she is able and willing to take on. For example, she does all her own laundry with the washing machine in her residence. And they have now placed her in charge of dispensing soap, which is purchased in large containers, into smaller containers to be distributed to each resident.

Narelle, who still loves art and all sorts of craft, recently designed and painted a fan that was auctioned off as part of a fundraising collaboration with Vornado. Peace of Mind and Hope for the Future

Narelle’s mother is relieved that her daughter is now in safe hands at SAAH. She said: “Residing in a home with other residents with autism gives me peace of mind, as Narelle can make friends with like-minded individuals in a secure environment.”

“I am also comforted that she has friends who will keep her occupied with various activities at the home,” she added.

But despite that the fact that Narelle is safe at SAAH, and this allows her to resume full-time work, her mother still looks forward to a time when Narelle is able to live safely with her and the rest of her family.

And this is a target that the staff at SAAH hope to be able to work towards as well. They try to help Narelle understand why her mother has boundaries for her. Eve Lee, Resident Manager at SAAH sees the potential in Narelle. She said: “Once she is able to understand the need for boundaries and abide by her mother’s rules, Narelle can return to living at home, and possibly even begin working. She has that capacity.”

For now, the staff at SAAH are focused on the more immediate goals of helping Narelle learn to live safely at the home, and being that safe place for her in every sense of the word. As she grows and develops, it is our hope that one day, hopefully soon, we could help turn Narelle’s “if only…” into reality.